Two cakes in one week.

I might have a bit of a problem. But… I dunno for sure. 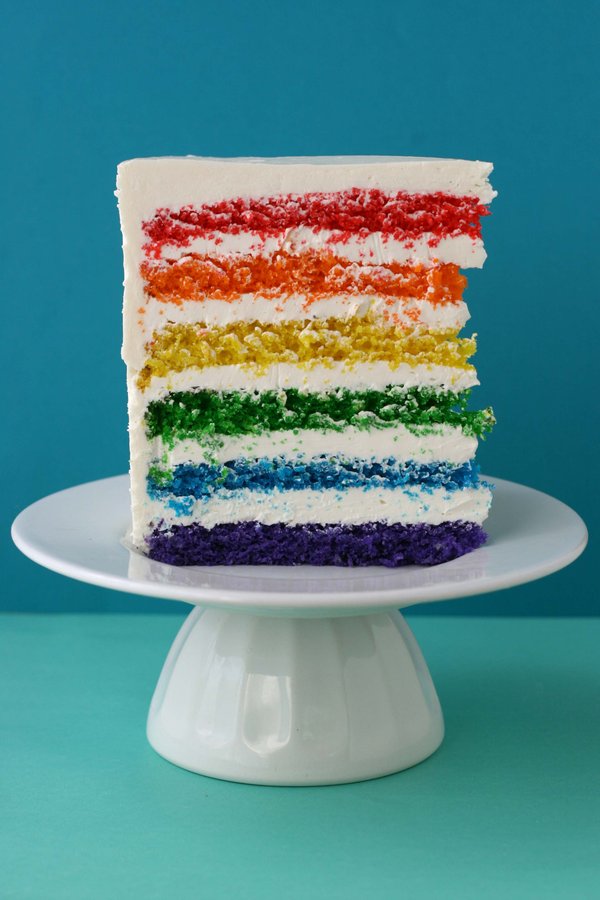 Anyway, I made this cake for a good friend.

A friend that started as my worst enemy 12 years back, a friend that dreams of losing shoes and a friend that understands the great significance of screaming “EARTHQUAKE!” She’s moving to Ohio at the end of this week, and although I’ll miss her, I know she’s going to have an awesome time living there.

As soon as she told me she was having a going-away party, I thought of the perfect dessert to tote along. I don’t think anything else would have been more suitable than this monstrosity of a cake. 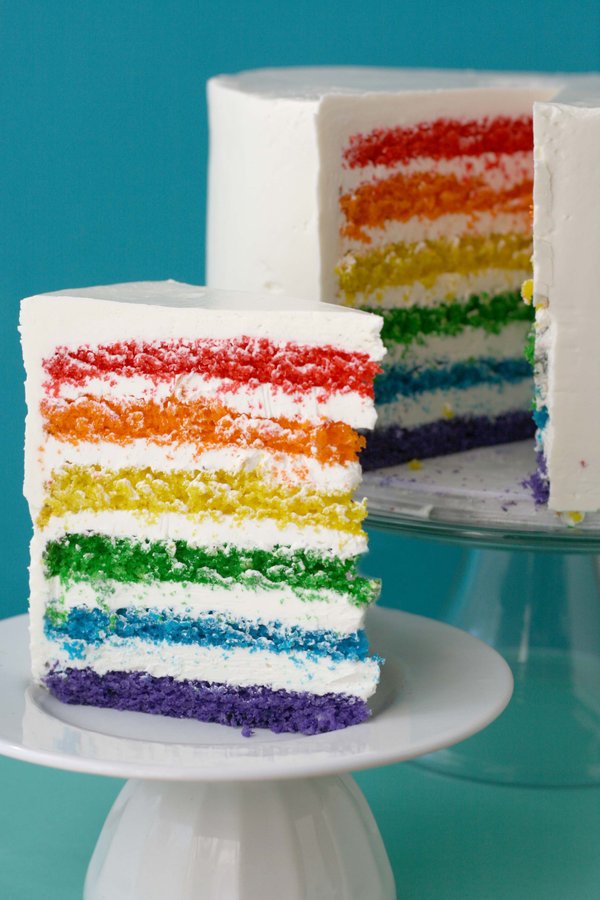 The six individually baked layers match her insanity (in a good way!!!), she loves rainbows, and it’s got lemon flavored icing because she likes… well… Lemon.

That wasn’t very eloquent, was it?

But the most important aspect of this cake, the thing that makes it so her is the fact that it’s frosted in white buttercream. Why? Because the smooth white exterior makes the cake look completely normal, but once you slice into it you realize… OH SNAP! THIS CAKE IS CRAZY!

And then it all makes sense. 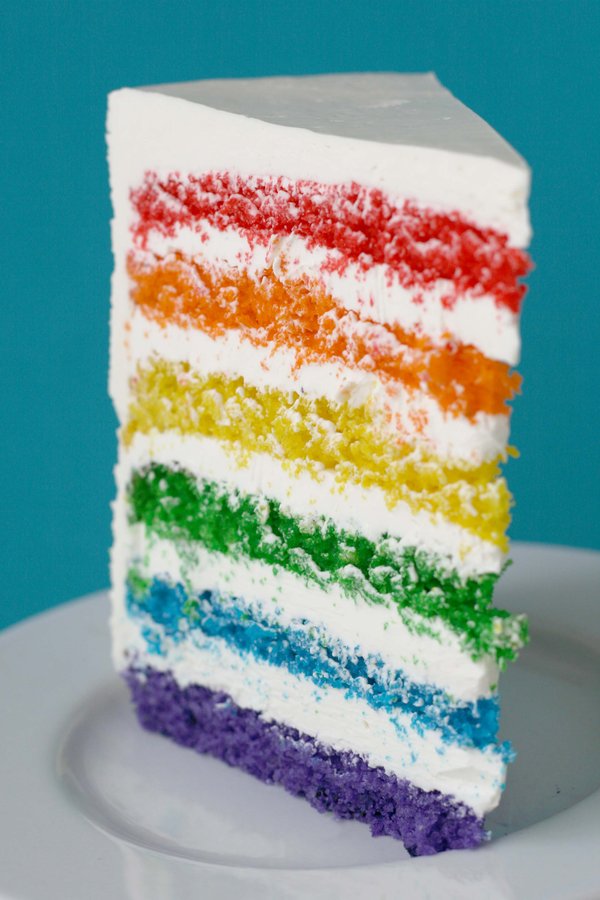 The following video was mailed to me by the Daly family (thanks again – you guys are awesome!!). It’s amazing and I want to share it with you guys!

Super Epic Rainbow Cake
I’m adding a disclaimer here: THERE IS A LOT OF FROSTING/BUTTER IN THIS CAKE. I used a lot because I wanted the cake to be very striking visually. It is intentional. Put in less if you want. Also, I’m not forcing you to eat this entire cake by yourself, so – seriously – quit freaking out about the butter.

Watch me make this cake with Ms. Stewart on The Martha Stewart Show!

White Cake (but not really)
I made things difficult on myself and altered a coconut cake recipe for this. I don’t know why I didn’t just make a white cake from a white cake recipe, but…. I didn’t. Here’s the source if you’re looking to make a coconut cake. It looks divine, but my friends don’t like coconut 🙁
2 sticks (226 g) butter, room temp
2 1/3 c (426 g) sugar
5 egg whites, room temp
2 teaspoons vanilla
3 c (426 g) flour
4 tsp baking powder
½ tsp salt
1 1/2 c (355 ml) milk, warmed for 30 sec in microwave to bring to room temp
Red, orange, yellow, green, blue and purple GEL food coloring. Liquid will not be vibrant enough!

Preheat the oven to 350F degrees. Oil and line how ever many 9” cake pans you have (I have three and I just reused them).

Sift together the flour, baking powder and salt. Set aside.

Cream the sugar and butter, then add the egg whites (I cracked them all into one bowl) and add them a little at a time. Add the vanilla and mix until fully incorporated. Then, alternating between wet and dry, add the milk and flour mixture in two parts.

Divide the batter amongst 6 bowls (It’s about 1 c each, but I did it by weight. Weigh your mixing bowl before you begin adding ingredients and then subtract the weight of the bowl from the final measurement after the batter is completed. Divide that number by six and add that weight of batter to each bowl), and then whisk a fair amount of the appropriate food color into each bowl. Keep in mind that the color of the unbaked batter will be the color of the baked batter. Pour into the pans and bake for 15 minutes each.

When you remove them from the oven, let them rest on the cooling rack, in the pan, for ten minutes. Then flip, cover, and stash them in the fridge to cool quickly.

Lemony Swiss Meringue Buttercream
(Someday I will make a post, besides my pancakes or mint macarons, that doesn’t involve this recipe!)
I made this recipe twice today because I underestimated the amount of buttercream I would need/ I would recommend that you do the same because you would need a HUGE bowl to make this much buttercream at one time! Please click here for a step-by-step guide to making Swiss Meringue Buttercream and troubleshooting tips!

Cook the egg whites and sugar in a small saucepan over medium heat, whisking constantly, until the sugar is completely dissolved (test by rubbing some between your fingers. If it’s completely smooth, it’s done). Pour into another bowl (a stand mixer is preferable) and whip on high speed until room temp. Then, on a medium-slow speed, add the butter, waiting until each piece is completely incorporated before adding the next. After all the butter has been added, turn the mixer back to high speed and whip until it has come together, about five minutes. Add the extract, beat briefly and then use.

Assembly
Stack the layers in your preferred order and fill and frost as you would any other cake.

Once frosted, the cake can be left on the counter without any problems, but feel free to refrigerate it. Just be sure that the cake is at room temperature when serving or the frosting will be hard, not smooth.