Mesmerized; memorized motions dance through my fingers. I know the signs, tricks and shortcuts as I race to the end, but still my heart pounds. Despite the fact that I stopped moving long ago, I feel sweat begin to well in my pores as I fixate on the flickering screen. The inward collapse of my chest stops. I hold my breath.

It’s intense to play such games. 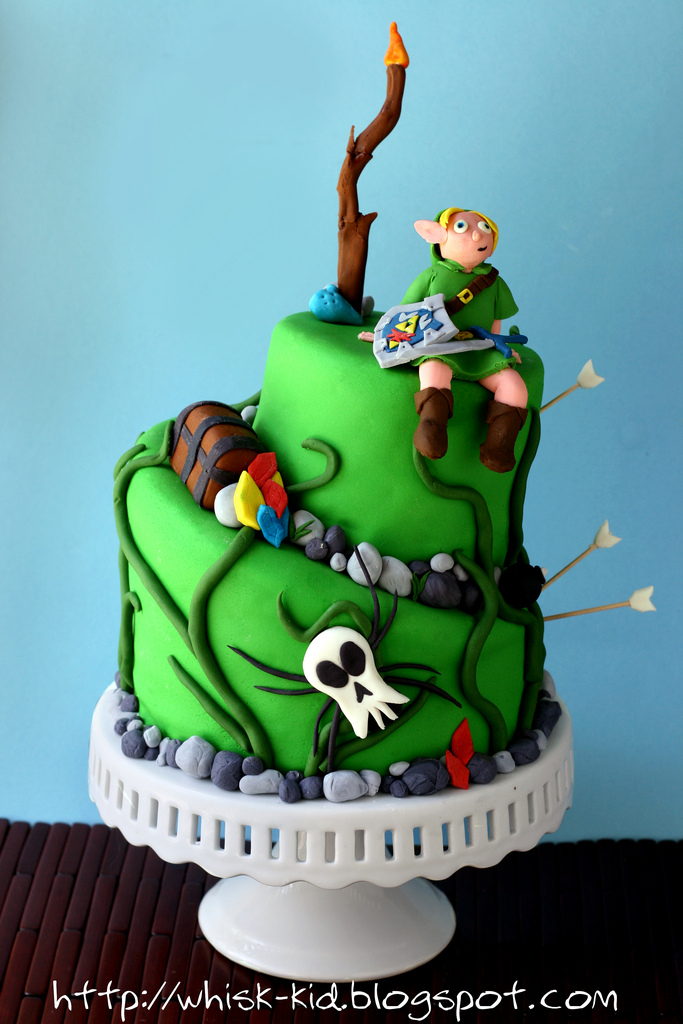 Between two hands, my small fingers cradled the boxy controller of our well-loved NES. Although I spent a lot of time outside as a child, I found myself fascinated by video games. I would look through our collection almost daily, thumbing through titles and wondering what it would be like to actually beat one. Although we had a Game Genie, I could only imagine the plots that filled many of the cartridges. Most games proved to be too difficult for my untrained mind, so I tended to stick to my favorites. Duck Hunt was an obvious choice for novelty alone, but I also loved The Legend of Zelda and all of the Super Mario Brothers games. But what interested me most about Zelda was the classic “rescue the princess” storyline. But because I really had no hope of ever doing such a thing, I hung with Mario instead. Besides, he’s got cool things like fire flowers, raccoon suits, 1-up shrooms and magic whistles.

We had a Sega too, and although I was crazy about Sonic, for some reason Sega games didn’t grow with me the way Nintendo ones did. As the NES matured through the years and brought reincarnations of those favorite games, I was excited to try them again.

But I was surprised to find that I no longer favored Mario. I much preferred to spend my afternoons riding around on Link’s horse, Epona, fighting Ganon, or hanging out on Lon Lon Ranch than I did bouncing around in Mario Party or side-scrolling old school in Paper Mario. I appreciated the challenge more, and loved that I was finally able to discover the [now-played out but still loved]Legend of Zelda. It opened my eyes to all of the other wonderful video games out there…

Which is a good thing, right? 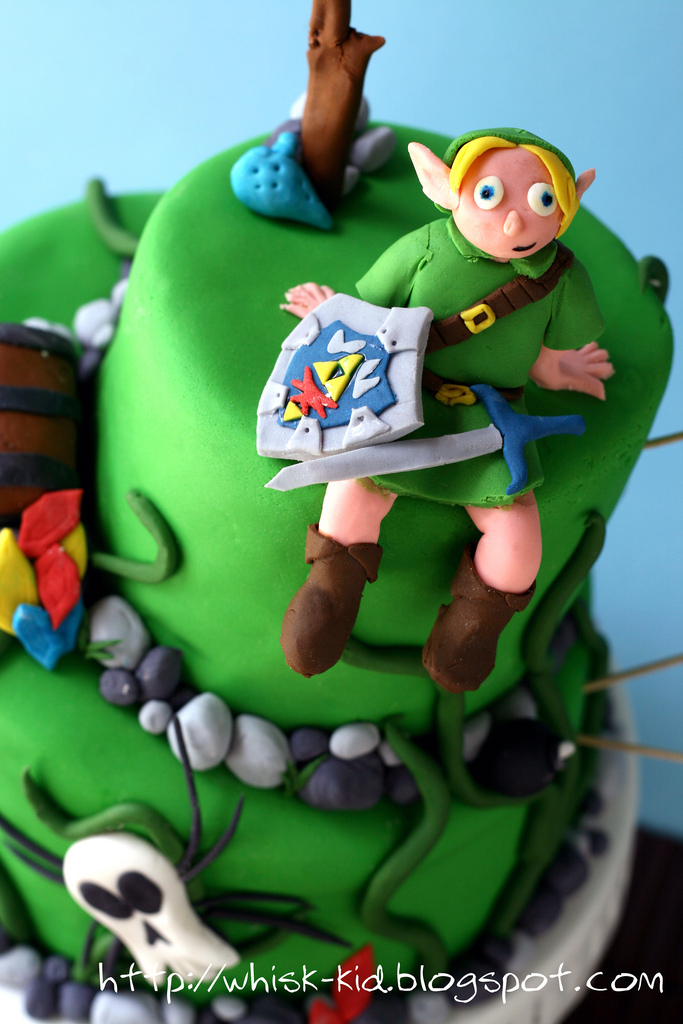 I was crazy about Dark Cloud, Final Fantasy, .Hack, Kingdom Hearts, Katamari Damacy, Croc, The Neverhood, Crazy Taxi, Jak and Daxter, Soul Calibur, Animal Crossing, The Sims and so many others… I was once addicted to Dance Dance Revolution and thought that I was unbeatable at Mario Kart. Even though they’re not all Nintendo games, I think you can probably understand what I’m getting at.

So it’s only expected that my younger brother, C, would follow in my footsteps, right? The title of gamer was graciously passed to him a few years ago when I traded my controller for butter and sugar.

Don’t I have the healthiest hobbies?

Anyway, I’ve been pestering C for quite awhile to give me some ideas for his birthday cake. But up until yesterday morning, the only ideas the little bugger had for me were “marble cake” and “caramel frosting,” so I decided to introduce him to my friend, Google images. We clicked and scrolled through pages of cakes that I thought he might like, but the only thing that really struck his fancy was this. A fine cake, of course, but I really wanted to do something special for him. You see, I’ve not been able to spend much time with C while I’ve been away for school, and it makes me sad to come home and see how much he’s missed me. I’m happy, of course, to have been missed and I missed him too, but our age gap is just so large that he is, unfortunately, growing up without my brother and I.

I want to be there for him, and it hurts that I can’t really “grow up” with him.

I know a cake won’t fix this (even though I am a firm believer that cake fixes many, many things), but it did help. It was fun to listen to him get more and more excited about what kind of cake he would have as we looked through images, and I really liked that he hung around in the kitchen while I was working. I’ve always known it, but my little brother is a seriously cute kid. He’s got the classic little kid smile – missing teeth and all. His big blue eyes are divided by a freckled nose and rimmed by glasses. He’s in need of a haircut, but I almost prefer his hair messy as it is to being clean-cut and straight out of the barbershop. He’s tall for his age, and lanky in his limbs. He has a hard time saying ‘v’s and his jokes are just as bad as my own. He hates school but loves recess. He’s a smarty pants and reads books like nobody’s business. He’s nice and sweet but sneaky like every other kid I’ve ever known. 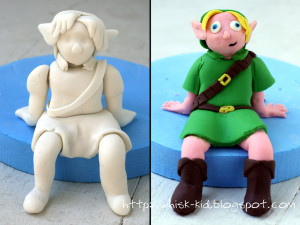 Short and simple? He’s awesome. He’s adorkable. He’s a nerd and I love him!

Happy 9th, C! You’re crazy cool! And a very happy Father’s Day to my dad who’s not into holidays like this 😉

Legend Of Zelda Cake, for C
Ok, there’s obviously a lot more to this cake than just a recipe, but I’m not sure how great I’d be at explaining the whole ordeal. I used gel food colorings to dye purchased fondant (Satin Ice. Do not buy Wilton fondant! It tastes terrible!) and I used this image as my reference for the fondant Link figure. Everything was handmade. I have a set of gum paste tools (I don’t recommend buying these off of Amazon. Get your weekly %40 off coupon for Michael’s and buy it there instead!) that I used for some pieces and also used an X-acto knife on nearly everything. C loved it!

Marble Chiffon Cake adapted from All Recipes
I usually hate marble cake, but I am happy to say that I really liked this one! It’s very moist and soft, unlike many marble cakes that I’ve had in the past. This makes a little more than you will need for the cakes, so I just baked cupcakes with the extra batter.

In a bowl, combine cocoa, boiling water, 3 tablespoons sugar and 2 tablespoons oil; whisk until smooth and allow to cool.

In another bowl, combine egg yolks, water, remaining oil, and vanilla then add to dry ingredients. Mix just until there are no more lumps.

In a large bowl, beat egg whites and cream of tartar until soft peaks form. Fold into batter in two additions. Move half of the batter to another bowl before completely mixed and fold in the cocoa mixture until no streaks remain. Continue to fold the original batter just until all streaks are gone.

Alternately spoon the batters into prepared pans and swirl with a knife. Bake 4 inch cakes for about 20 minutes and larger ones for about 30 or until top springs back when lightly touched. Remove cakes from oven and allow to cool on a wire rack for ten minutes before inverting on the rack to cool completely.

Have a small bowl ready to pour finished caramel into before you start working.

Cook the sugar in a heavy-bottom pan until a medium amber color. Remove from heat and pour in the cream, stirring gently until combined and no longer bubbling. Pour into the small bowl and let rest until cool to the touch. Whip into buttercream

Be sure to freeze any extra frosting. Just allow it to come to room temp and whip it before using again.

Heat the 1 1/2 c sugar and water on the stove to 245F (118C) stirring occasionally only after the sugar has been dissolved. When the sugar syrup is around 200F (93C), begin whipping the egg whites. When they get to soft peaks, add the remaining sugar and continue whipping to medium peaks, being careful not to overbeat. When the syrup is the correct temperature, slowly pour it into the eggs with the mixer on high. After fully incorporated, beat the frosting 7-10 minutes until the outside of the bowl is room temp (I usually go a little longer than this; often times the bowl is not room temp when I begin adding butter. If the mix seems to soupy, put it in the fridge for a few moments or try briefly chilling some of the butter in the freezer before adding). Begin adding the butter, tablespoon by tablespoon, beating until fully incorporated. The frosting will deflate a little, but it’s ok. Keep whipping until the frosting comes together (you may not need to add all of the butter), add the vanilla and caramel and continue whipping until light and fluffy.