The trip into town was a long one by bike, but D and I found ways to justify it. Without helmets or supervision, he and I peddled out there many times each summer, often in search of something sweet.

I can’t remember how long it took us to reach that liquor store, but it seemed like hours. Which, now that I think about it, is probably largely due to the fact that I knew the road too well. Each curve and landmark we passed prompted visions of the ones that remained, leaving me eagerly counting them down to the last. There was that one tree, the hill with the sketchy guardrails – oh – and the house with the porch over the garage. The images seem fresh in my mind even now, but the clearest is that of the last. Excited over the thought of finally making it to our destination, I loved reaching the home stretch. That uncommonly straight bit of road edged on either side with a low-lying shrub and cattail-infested swamp. It was raised enough to offer up a nice view into town, flat enough to allow for serious speed and seemed like the finally attainable light at the end of the tunnel. I savored that stretch until the very end, comforted by its familiarity and meaning as it led D and straight onto the lone sidewalks of Main Street. 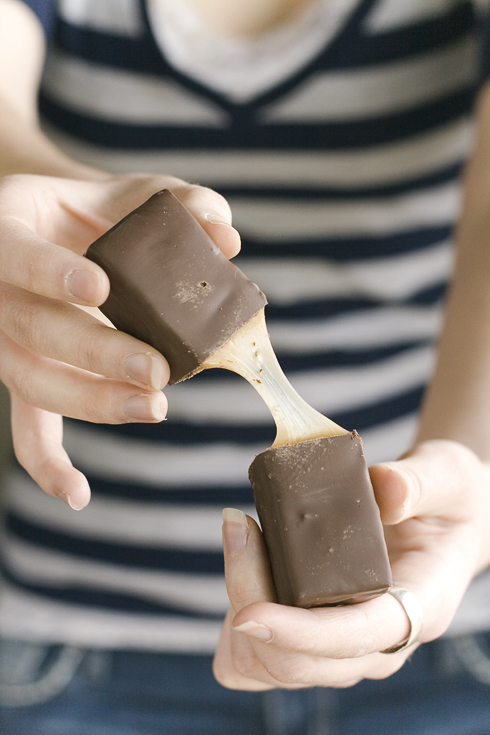 We were finally there, and I was ready to claim my prize.

D and I kicked the stands on our bikes as if to scare them into staying put and left the sidewalk behind for the cool interior of the shop. D, as I remember, headed straight for the candy cigarettes, Warheads and bubblegum, but I had different interests. With a pocket full of mixed change, I passed the numerous displays of candy and chose, instead, to explore the freezer case near the deli counter. I sorted through the cones and novelty treats (anyone else remember those nasty foot-shaped abominations on a stick?) quickly, standing on tip-toe to reach the box of over-sized popsicles in the back. They were all I ever wanted when we made it to town, and they were all I ever bought.

Truth be told, I’ve never thought of candy – particularly candy bars – as enticing. Although I do remember the last candy bar I ate (curse you and your candy bowl, H!), I can’t remember the last one I bought. Even as a wee one during Halloween, I always found myself more excited about eating my Grandma’s meatballs (the retro ones with the grape jelly – yum!) at the end of the night than eating a hole through the bag of sweets I had collected. So what’s my beef? I think it’s just a matter of practicality. If I’m going to spend money on something sweet, I want it to be interesting and refreshing – not weigh me down like a brick. Which, come to think of it, is really what a candy bar is, isn’t it? There’s nothing wrong with that, of course, but the chocolate on top of sugar on top of more sugar is just too much for me. 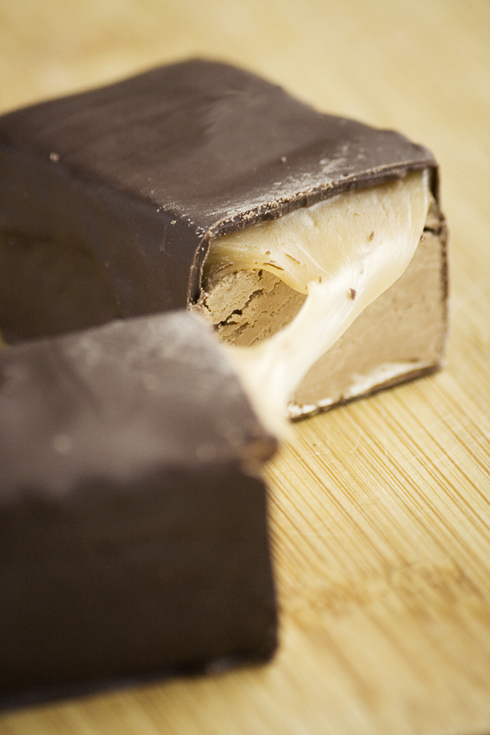 I appreciate it the work and thought that goes into it and even the idea behind it all, but… I’m not buying.

Anyway, with our selections in hand, D and I emptied our pockets for the cashier and went on our merry way. He with his package of who-knows-what crinkling between his fingers, and me with a popsicle the size of my arm fitted in my hand.

Those were the days.

Milky Ways
Even though I don’t like candy bars, I couldn’t stop myself from trying to recreate them at home. I think these are pretty accurate, and they’re very good, but I could only handle a bite at a time!
Printable Recipe

Line and grease an 8 x 8 pan with parchment paper. Set aside.

Put the sugar, corn syrup and water into a pan over medium-high heat and cook until the sugar dissolves, swirling the pan occasionally. Once the sugar has dissolved, stick a candy thermometer into the pan and cook, without stirring, until the temperature reaches 260F (127C).

Meanwhile, pour the egg whites into a non-plastic mixing bowl. When the sugar gets to 250F (121C), begin beating the egg whites on medium speed. You should get soft peaks.

When the sugar syrup reaches 260F, remove the pan from the heat. Turn the speed on the mixer up to high and slowly pour in the sugar syrup, being careful not to pour it on the beaters or on the side of the bowl. After all of the syrup has been incorporated, continue beating on high speed for about 5 minutes, or until the egg whites are shiny, white, and stiff.

Turn the mixer down to medium and add the melted chocolate and salt. Beat for about a minute, scrape down the sides of the bowl (the nougat will be very thick) and beat until smooth. Pour into you prepared pan and spread it into an even layer. Cover and allow to set at room temp overnight until completely set.

Once set, remove the nougat from the pan and cut it in half with an oiled knife, giving you two 4 x 8 pieces. Cut each half into eight slices, being careful to keep cut slices together because you will be putting them back in the pan. You will have 16 bars.

After cutting, line the pan again with parchment and oil the sides. Put the cut nougat back into the pan and set aside. Prepare caramel.

Caramel
This caramel is solid enough to handle, but it will run if left to set for an extended period of time. Because of this, it is important to dip the bars in chocolate as soon as you can after cutting them for a second time.

Place the sugar, corn syrup and water in a medium pan. Cook over medium heat, swirling the pan occasionally to help dissolve the sugar. Cook until the syrup is amber colored (however dark you’d like), then remove from heat and quickly whisk in the butter and cream, being careful as it bubbles up. Allow to cool 10-15 minutes, stirring occasionally, until the caramel is no longer so hot that it will burn. Pour over cut nougat and allow to set 3-4 hours.

Remove caramel-covered nougat from the pan and peel away the parchment paper. Re-cut the bars by flipping the mass over, caramel side down, and cutting along the lines. Set aside, caramel side up, and prepare the chocolate for dipping.

Cut a sheet of parchment to set the dipped bars on. Set aside

Chop the chocolate (if using candy melts, don’t worry about it) and place in a bowl over a pan of simmering water. Stir frequently to melt evenly and prevent burning. Once the chocolate is completely melted, pour it into a dish suitable for dipping (I used a sandwich-size plastic container). Dip each of the bars individually using a fork to turn. Be sure to tap the handle of the fork multiple times on the side of the container to help thin the coating of chocolate. Place on parchment to set.

Store in an air-tight container at room temp.