Twenty minutes earlier, I had been comfortable.

Twenty minutes earlier, I was asleep, with his arm around my waist, oblivious and warm on the floor of his apartment.

Shortly afterward, he’d tiptoed to the bathroom, briefly stirring both myself and his dog with his careful steps.

So it was there and then, on the floor that placid 20 minutes later, that I fully awoke to his polished voice. Gently urging me to get up, he lifted a shaking hand from my hip and rose from his knees to leave the room. 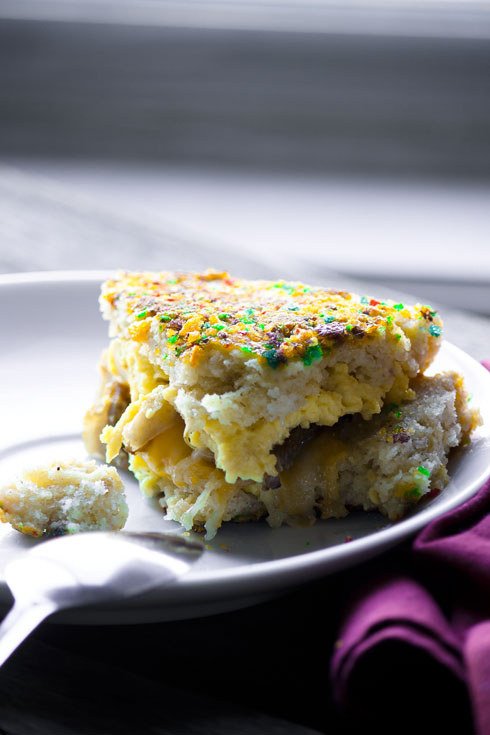 I dressed quickly in his absence, desperately trying to find my bearings in the empty room. After retrieving my neatly folded clothes from his freshly-vacuumed carpet, the only trace of me that remained was my beaten sneakers by the door and the hoodie I’d shelved in the closet. And of him? Only footsteps. As I made the observation, he’d returned from the kitchen with a garbage bag to collect his bedding, and then, bag in hand, passed through the sliding doors like a ghost and left.

The room was silent.

A month prior, with this gloomy moment looming ominously on the horizon, he and I went to our favorite breakfast place for what we knew would be the last time. With no regard for nutrition or health, it’s the kind of dive that piles everything with cheese, is supremely generous with bacon and chorizo sprinkles, and serves french toast with a healthy ladle of creme anglaise – occasionally spiked with booze – and a handful of fat berries. When you arrive at The Harvest, dignity and decency go out the window, because honestly, a small part of you is going to hate yourself later no matter how gloriously your meal unfolds and how fantastic a time you have while you’re there.

So this, I realize, is basically where I am with S. Standing awkwardly in his empty apartment with tear-soaked cheeks, I reflect on our soon-to-be-over relationship and the fact that I’ve really no right to be so sad. I knew at the beginning that our time would be limited, and still I indulged, as painful as I knew things were going to be just a few months down the road.

That day at The Harvest, both of us consumed such a large amount of greasy goodness that we probably put ourselves at risk for some kind of bodily malfunction. But still – I think it was worth it. 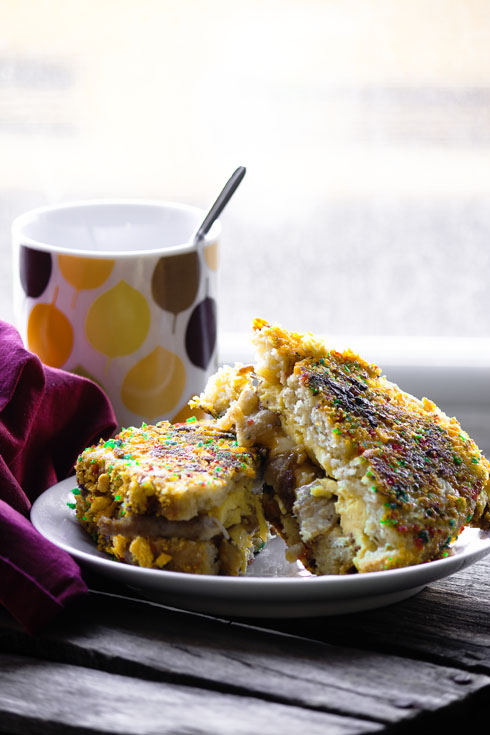 After all, indulgence and recklessness make for wonderful and unforgettable experiences – both good and bad for the heart all at once.

It was worth it to be the girlfriend for that short period of time because it made me happy. S and I weren’t perfect, which was why we decided that that hug goodbye at four in the morning would be the end, but we were good for each other and we had fun together.

Which is enough for me.

The Killer Breakfast Sandwich based on the one at The Golden Harvest in Lansing, which is an upgraded version of their Cereal Killer
This was a – if not the – favorite menu item of both S and H. I’ve never had it before, but I decided to make it in their honor this weekend. Also, as a note, I don’t think the original sandwich has bacon on it. Looking back on texts from H, I seem to have just forced bacon into the equation without realizing it. That said, I think it’s a pretty welcome addition 😉

Cheddar Jalapeño Bread slightly adapted from Epicurious
This bread will make your house smell so deliciously spicy while it bakes. Just be aware that it is an extremely wet dough – try not to add much more flour than absolutely necessary to it.

Place the yeast, 1 tablespoon of warm water and honey in your mixing bowl. Set aside until foamy, about five minutes.

When the yeast is foamy, add the remaining water and the flour, salt and olive oil. Mix on low speed until a soft dough forms. Increase speed to medium high and beat 3 minutes. Add the jalapeños and cheese and mix until combined.

Scrape the dough into an oiled bowl and cover tightly with oiled plastic wrap. Let rise at room temperature until double in size, 2 to 2 1/2 hours, or overnight in the fridge.

Turn the dough onto a well-floured surface and, using floured hands, gently form into an 8″x11″ rectangle. Roll the dough up like a jelly roll and put, seam side down, in an oiled loaf pan. Cover tightly with plastic wrap and let rise again until the dough fills the pan and starts to peak over the top, 1 to 1 1/4 hours.

Preheat the oven to 400F. Brush the risen loaf with the egg and bake until golden and hollow-sounding when knocked from the bottom, 50 minutes to 1 hour*.

Remove from pan and cool completely on a rack before slicing.

*I used a thermometer to check the temperature of the bread so I do not know that this time is accurate. Go for 210F is using a thermometer.

Take out your favorite cast iron pan and fry the bacon until crisp. Drain on paper towels.

While the bacon is cooking, whisk together 2 eggs and a splash of milk until foamy. Pour most of the bacon grease out of the pan and set over medium heat. Add the beaten eggs all at once and cook without disturbing much, using your spatula to lift each side while swirling the pan to let uncooked egg settle underneath. Fold into itself before completely cooked, keeping the size of the sliced bread in mind.

Transfer the folded eggs to one slice of the bread and top with bacon, cheddar and the other slice of bread. Set aside and whisk together the remaining egg with about an equal amount of milk. Soak the sandwich in the egg mixture for about 30 seconds, then flip and soak the other side. Crust the soaked sandwich in Cap’n Crunch and pan fry until crisp.